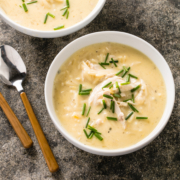 Various versions of this lemony chicken vegetable soup seem to be floating around the internet lately, as if back in fashion – and for good reason; it’s easy, flexible on ingredients, super flavorful, and generally inexpensive to make, like many soups. What’s not to love?

I can’t remember where I got the original version I began working from, which called for orzo, but like most things I cook, I began experimenting and working off-the-cuff pretty much from the start. I suggest you do the same. Orzo is certainly tasty and adds a fun chewy texture to the overall dish, but it is a pasta containing gluten and isn’t tolerated well by many. If that’s you, or if you generally try to avoid over-consuming gluten like I do, then try adding cooked rice (white or brown – your choice) at the end of cooking instead. Rice is a beautiful substitute.

Though this recipe – with its main ingredients being chicken, leek/onion, and celery – isn’t necessarily a spring soup, the addition of the lemon at the end keeps it super fresh and bright tasting, which does feel springy. I could also see wilting some spinach or arugula in at the end of cooking to up the nutritional value.

I’ve found that it tastes best if each eater adds freshly squeezed lemon to his/her individual bowl rather than finishing the entire pot with lemon before serving. In case you have leftovers, it just doesn’t taste right when reheated if the lemon is already added. This soup reminds me how simple cooking can still deliver really beautiful flavors.

12-16 ounces skinless, boneless chicken thighs, depending on how meaty you want your soup

12 cups chicken broth, depending on how thick you want your soup

optional: chives or parsley, for garnish

If using rice rather than orzo, cook rice according to package directions or using a ratio of 2 cups water to 1 cup of rice.

Heat the olive oil in a large saucepan over medium heat. Add leek, onion, celery, and garlic and saute until the vegetables are soft but not browned, about 5 minutes. Add chicken thighs to the pan, arranging on top of the vegetables, then add the broth. Season to taste with salt and pepper. Bring to a boil, cover, then reduce heat to low and simmer until chicken is done, about 15 minutes. Transfer the chicken to a plate and allow it to cool until it can be handled, then shred into bite-size pieces.

If using orzo, bring the broth back to a boil, then add orzo and cook until al dente, about 8 minutes.

Remove pan from heat, then add shredded chicken, dill, and rice, if using. Taste and adjust seasonings. Add optional parsley and chive garnishes, then serve with lemon halves for squeezing over each individual serving. 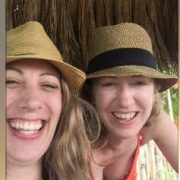 The Magic in the Rear View Mirror 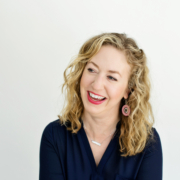 Love in the Time of Coronavirus 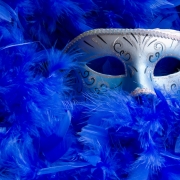 Happy Halloween! What mask are you still wearing? 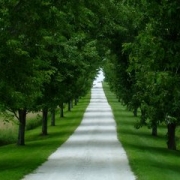 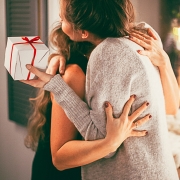 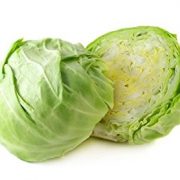