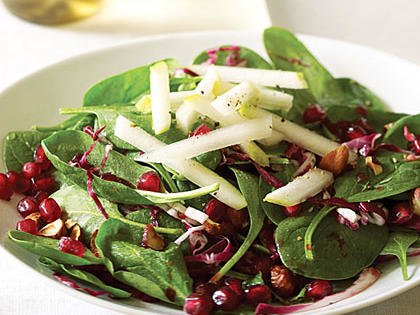 There’s simply no excuse for a boring salad.

Today I’m sharing a winner of a salad recipe I’ve personally tested with three different groups on three different occasions with overwhelming success each time. It’s an inventive crowd-pleaser, and I suggest you tuck it into your back pocket so you’re armed and ready the next time you’re asked to be the salad guy or gal for a gathering.

The first time I made this Pomegranate Pear Salad was for a holiday celebration on my dad’s side of the family. Let’s just say we have lots of “conventional American eaters” in this group – peeps who load up on meat and dairy and go light (or totally skip) the veggies and anything else they deem “new or exotic.” This group wants their food familiar, hearty, and not necessarily healthy. But at least half of the group tried my salad and loved it. Several of my cousins and aunts asked for the recipe after commenting on the bright, interesting flavors – the ultimate compliment. Success!

Since then I’ve made it for two distinctly less fussy groups of friends, all of whom strive to eat healthy. I was pretty confident they’d enjoy it, but even so you can never be sure that salad is going to go over well on a cold winter’s day. I’m happy to report it ended up being a delicious complement to chili  one day and to roasted chicken and sweet potatoes another day. I think the palate cleansing flavors and the natural sweetness in the fruit and dressing hit those taste buds that didn’t get satisfied by the spicy and savory flavors in the rest of the meal.

The original recipe came from the Salad Girl blog, a resource I share with all my clients. If you tend to think of salads as boring, your assignment is to browse that lovely site. I’ve used it as a resource over a dozen times and haven’t been disappointed yet. It’s a reliable source of inspiration. I ended up making some tweaks to the original recipe this time. Below is my spinoff:

1 cup pomegranate seeds (fresh are better for the fun “pop” they give, but frozen will work if that’s all you can find)

1/2 cup – 1 cup white cheddar shavings or Peccorino Romano, depending on how much your audience likes cheese

When ready to serve, simply add salad fixings to salad greens and toss well. I typically let each individual dress her own salad with the Pomegranate Pear Dressing, but feel free to dress the salad just before serving, if you think that will work better for your group. 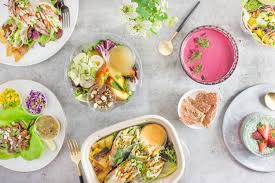 I changed my life dramatically when I began batch cooking. For those of you who aren’t familiar with this term, “batch cooking” is the practice of spending a few hours one to two times a week prepping, cooking, and properly storing food so you have ready-to-go healthful meals at your fingertips. This is a practice I loosely began in college, mainly because most of my friends were busy watching football on Sundays (a sport I don’t like), and I often had no one to hang out with. Somehow I got the idea to spend my Sundays cooking, which resulted in me feeling rewarded with a fridge full of healthy meals I could eat throughout the week. In the decades since, I’ve become much more practiced and savvy at batch cooking, and I believe it is one of my keystone habits that helps my entire week unfold somewhat predictably and flow smoothly.

Everyone’s lives are a little bit different, but I believe batch cooking is the key to consistently eating healthy for most people. I believe this because most of the reasons people give me for not eating well or “slipping up” sound something like this:

You get the idea. I’m guessing you’ve heard yourself saying something similar. Heck, I’ve said a couple of these things before, but those occasions have been rare because I’ve established the keystone habit of batch cooking.

Home cooking is essential to health, but it’s a skill that, unfortunately, many people have lost. You and your family will eat whatever is readily available in the refrigerator or cupboards. If you don’t cook regularly, you’ll rely more on processed foods and restaurant food, which are usually not the best choices for our health. There’s nothing wrong with having these things sometimes, but I discourage people from eating this way daily. I’m excited to help rekindle the art and joy of cooking in your life.

Let’s walk through some potential obstacles/excuses you may have to home cooking, and see if we can clear some space in your life for this essential habit to emerge:

The #1 reason people give for not cooking is a lack of time.

Many of us have allowed our lives to become very busy and fast-paced. In fact, it takes solid boundary setting skills and clear intentions to NOT allow our lives to become overbooked. Take a few minutes now to evaluate when you could set aside 3-4 hours to cook during the week (you’ll likely become faster the more you practice). If 3-4 hours is a stretch, find 2 hours. You can get a solid start in 2 hours. As I mentioned above, Sundays are usually a great day for me to knock out a bunch of meals. If I make other plans on Sunday, then I immediately figure out an alternate time to cook; sometimes it’s Saturday, sometimes it’s Monday late afternoon/evening. Just like anything else that’s important to you, you will need to schedule it in order for it to happen, and you might have to say no to something else in order to squeeze your cooking in.

The #2 reason people give for not cooking is that they don’t know how.

Cooking is a skill just like any other skill, so if you don’t know how to cook there is simply no way around the learning process. Start with a simple recipe and give yourself the space to learn and make mistakes. Everybody burns things and attempts a recipe or two that doesn’t turn out. Every mistake gets you that much closer to figuring it out next time! Consider taking a knife skills class or a Cooking 101 class to help get you started. Keep track of your questions and lean on me, or ask a friend who likes to cook to come over and show you some easy tricks. You can also ask Google or tap YouTube for how-to videos about anything you find confusing.

The #3 reason people give for not cooking is that they don’t enjoy it.

One common reason people don’t enjoy cooking is they’re too busy and don’t give themselves the time to cook a nice meal – so it becomes a stressful activity. Nobody enjoys that. A second common reason is that they simply haven’t practiced enough so they lack confidence. We already addressed these two obstacles above. The other reason I hear somewhat frequently comes from people living alone who say, “It’s no fun to cook for myself.” My response is always, “Let’s explore why that is.” To cook for oneself is to love oneself. You are worthy of quality, home-cooked meals. You are worth the time and effort. It might feel like a chore, but it is one of the most important things you can do to take care of yourself, so I encourage you to start dismantling that story you have.

All of that said, I empathize with people who don’t want to cook because, believe it or not, there are days when I don’t feel like cooking either. If my week has been unusually busy, I’ll definitely feel resistance to spending my afternoon doing this weekly chore, but because it’s become a strong habit I rarely give myself the option of not doing it.

I’ve also figured out how to increase the batch cooking “fun factor” by:

Cooking once and eating once is a recipe for spending a lot of time in the kitchen. Batch cooking allows you to make several meals at a time, speed through your clean up all at once, and will then give you several days or more away from cooking (depending on the size of your family). Also, if you’re someone who makes several trips a week to the grocery store, you’ll likely cut that back to one or two bigger trips.

(If you do this, eventually you’ll have a resource binder full of recipes you love and feel confident making.)

An Example of my Weekly Batch Cooking/Meal Prep:

Though the food I make varies each week, below is an example of what my batch cooking might look like:

(Remember, you could start with just one of these items; you don’t have to become a batch cooking boss on your first try.)

Stephanie Meyer, a Twin Cities food photographer, stylist, and author who offers meal planning subscriptions, bases her subscriptions on the following template, which may be helpful to emulate (or you could buy her subscription for a while to get a jumpstart):

The Benefits of Batch Cooking: